“[T]he strengthening of our economic foundation [should begin] by assuring that the majority of our population has enough to live on… Once reasonable progress has been achieved, we should then embark on the next steps...”

Thailand is world-renowned for her flavorful culinary delights with dishes like Pad Thai and Tom Yum Kung born out of a unique gastronomic history, maintained by the ingenuity of Thais to evolve their dishes in celebration of their culture.  But all of this is only possible because of one simple fact – Thailand enjoys an abundance and diversity of agricultural produce. 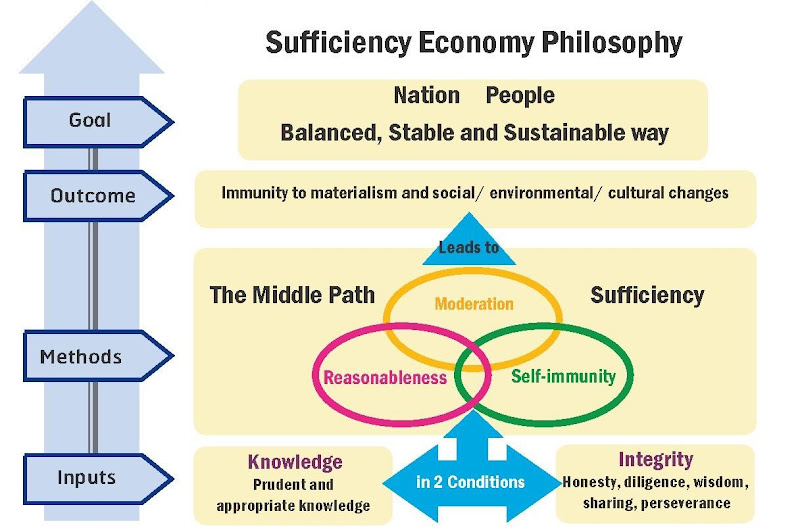 From the steep stepped farmlands of the North to the rain-soaked terrain of the South, agricultural best practices well-suited to each of the country’s topographical feature provide a steady stream of fresh produce that has been woven into the rich tapestry of Thai cuisine. What might be a lesser-known fact is that the country owes much of her agricultural success to the lifelong dedication of His Majesty King Bhumibol Adulyadej the Great, in fostering resiliency through advancing food security for the Thai people. King Maha Vajiralongkorn Phra Vajiraklaochaoyuhua has taken the concept further, by ensuring that Thais nationwide continue to enjoy food security through scalable best practices in agriculture.

OHis Majesty King Bhumibol Adulyadej the Great initiated more than 4,000 development projects for the betterment of the Thai people’s livelihoods, all of which were based firmly in his philosophy of Sufficiency Economy, which advances fundamental principles of Thai culture deeply rooted in Buddhist precepts.  The philosophy espouses development in all aspects based on moderation, prudence and self-immunity.  It emphasizes living within one’s means and with limited resources, thereby decreasing dependence on externalities and susceptibility to market volatility while increasing one’s control over the means of production and output. 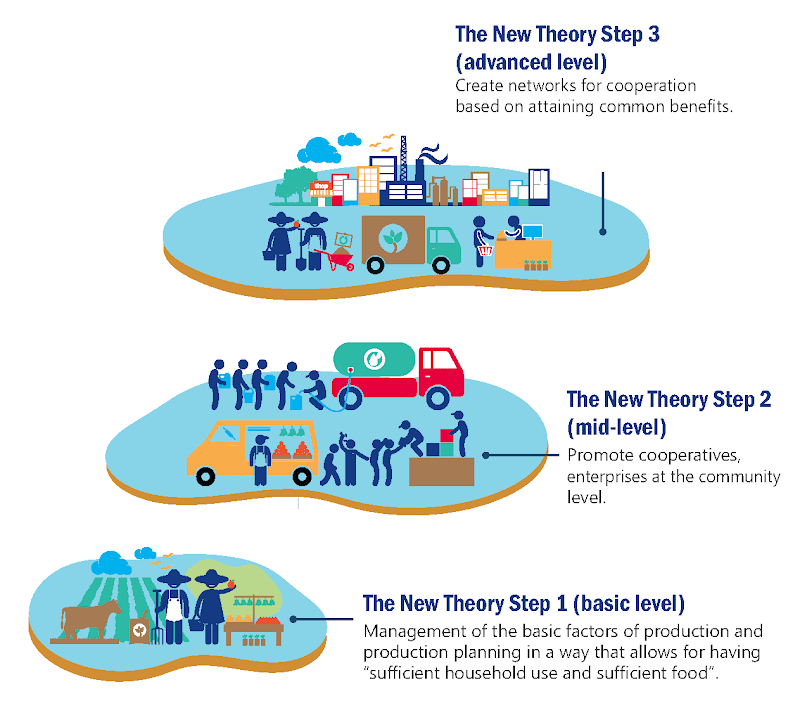 Development by steps according to the new theory

At the time of the Philosophy’s conception, Thailand was still an agrarian country but one poised for significant economic development.  His Majesty the late King had the foresight and vision that such development could not and should not leave anyone behind. This compassion was then engendered the New Theory, under which the essential principles of the philosophy of sufficiency economy are applied to agriculture. Given the historical context, food security at the individual and the household levels would come to underpin more stable economic growth by lessening the risk of external shocks at the grassroots level. By reaching the furthest first, the New Theory is one of the most concrete examples of the application of the philosophy of Sufficiency Economy as it seeks to foster balanced and sustainable living through the management of land and water conservation, especially for those whose livelihoods were particularly susceptible to impacts of economic crises and natural disasters. This, in turn, allows farmers and small-scale land owners to holistically manage their lands while living harmoniously with nature and within society as they can rely on locally sourced produce for sustenance, even in the face of economic hardship. 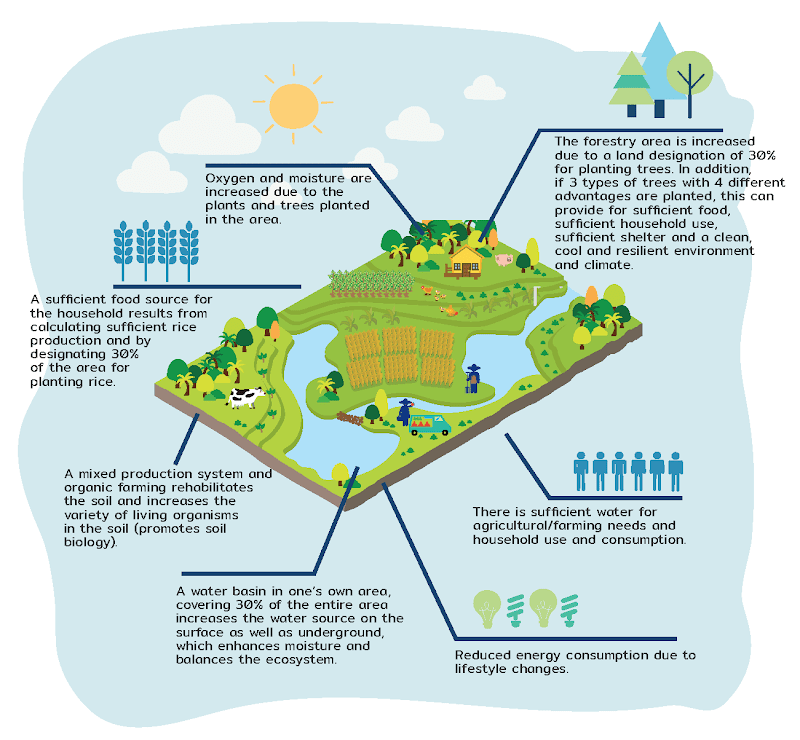 Staying true to His Majesty’s Oath of Accession to “continue, preserve and build upon the royal legacy”, the Khok Nong Na Model expands on the New Theory to maximize both land use and water retention, both on the surface and underground, for agricultural production. The concept essentially calls for the building of a small weir on a plot of land that acts as a reservoir to prevent flooding during rainy season but also retains and acts as a source of water during dry season, both of which have been exacerbated by the adverse effects of climate change. 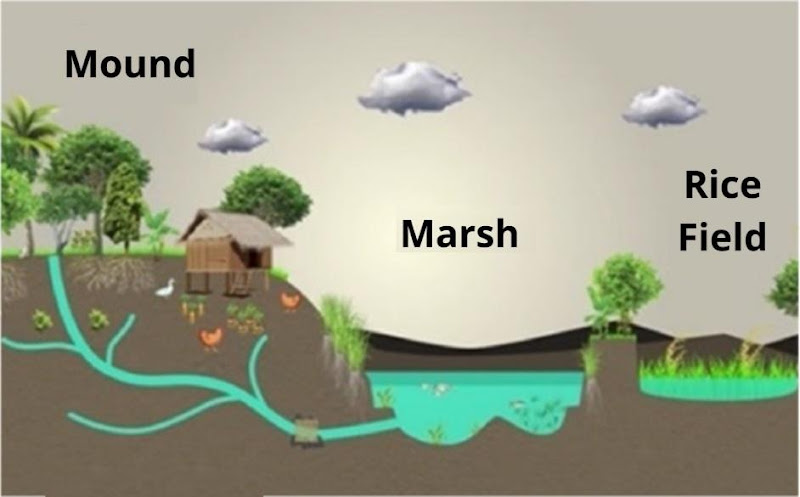 “Khok Nong Na” is an amalgamation of three Thai words that encapsulate key elements of the eponymous concept. First, a small ridge (Khok) is built of soil obtained through swamp digging or other substrate rich in nutrients suitable for growing fruit plants and trees, capable of withstanding local conditions, to generate food and household income. The next important element is a weir (Nong) that runs the length of the plot of land with sufficient depth to store water for agricultural use all year round while providing moisture through the breadth of the land. The last key element is the rice paddy (Na) on which organic rice farming should be practiced with the aim of restoring essential nutrients to the soil so that yields are pesticide-free and safe for human consumption. The overall objective of the Khok Nong Na Model is to ensure food and financial security from the smallest units within society by becoming self-dependent while minimizing susceptibility to externalities. This will in turn translate into food system resilience for the country.

The success of the model is now being scaled up throughout the country by various agencies including the Foreign Ministry’s Thailand International Cooperation Agency and the Community Development Department. Pilot projects and vocational programmes designed to acquaint those keen to explore the application of the Khok Nong Na Model of their own volition, have been implemented nationwide. The Community Lab Model aims to offer a better quality of life through the upskilling and reskilling of recent graduates, whose prospective jobs COVID-19 has taken away, in 330 districts with over 3,300 participants. Similarly, the Household Lab Model has been converting plots of land belonging to almost 6,000 model farmers in more than 300 districts countrywide into Khok Nong Na model lands. Building upon his father’s legacy, His Majesty King Maha Vajiralongkorn Phra Vajiraklaochaoyuhua has guided the Thai people to put into practical application the Khok Nong Na model of agricultural practices to ensure that food system resilience remains one of Thailand’s crowning achievements in the years to come. 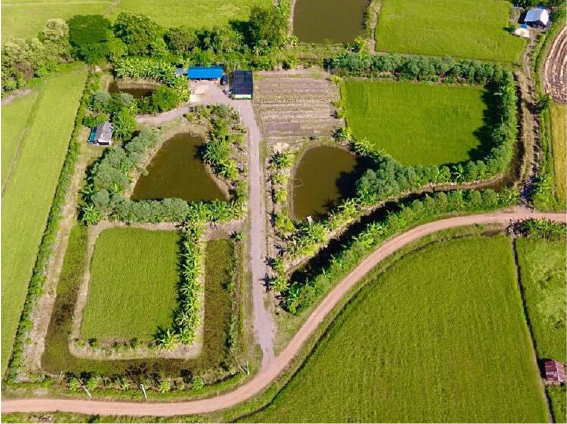 Dr. Wiwat Salyakamthorn became well known from decades of training farmers on the application of Sufficiency Economy Philosophy to the agricultural sector to promote sustainable productivity and livelihoods.  He has experience working at the Office of the Royal Development Projects Board and in experimenting with the development concept on his own family’s farm in Chon Buri, with great success.  He is also a former Minister of Agriculture and Cooperatives and the Founder of the Agri-Nature Foundation which runs community workshops at his farm.  In addition, he holds other prominent positions, including President of the World Soil Association, and President of the Institute of Sufficiency Economy.